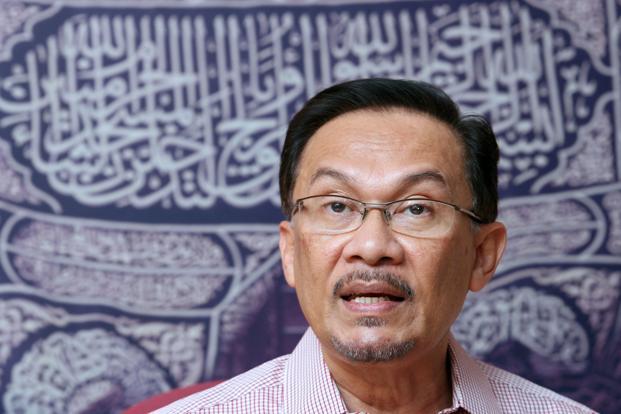 While Malaysia’s charismatic opposition leader Anwar Ibrahim was being jailed for five years for sodomy last Tuesday, Prime Minister Najib Razak was participating in the nearby launch of an index to assess levels of compliance to Shariah law.

Najib said that he hoped the government’s own Shariah observance would become “a culture of collective practice.”

Two years ago he became the first non-Arab government head to visit Gaza. At a joint press conference with Hamas Prime Minister Ismail Haniyeh, Najib said he came “to express my solidarity with the Palestinian people.”

A few weeks earlier, he had told a New York audience: “The problem in today’s world is not between Christians, Muslims, or Jews, but it’s really between the extremists and democracy.”

He said there, that “moderation is, you know, based on certain principles and very sound values, like justice. It calls for us to be bold enough to occupy the centre stage, and the moral high ground.”

He responded in part to the recent Charlie Hebdo slayings: “If you criticise other religions because of freedom, it will have severe repercussions.”

The Anwar jailing – widely condemned by foreign governments including Australia and the USA, and by legal and human rights organisations – raises questions about which is the real Najib, the real Malaysia, about how moderate, democratic and ultimately modern, the country truly is.

The tragedies of Malaysia Airlines flights MH370 and MH17 served to distract international attention, for a time, from such issues, and to attract sympathy instead for the government there.

But Anwar’s case is re-focusing interest in Malaysia’s governance, and also sparking a broader re-examination of where South-east Asia is heading.

By some measures it is only Indonesia and the Philippines, out of the 10 countries in the Association of South East Asian Nations, which are today unequivocally democratic in their governance, countenancing changes in administration following elections.

They are now outnumbered by the robust democracies of north Asia – Japan, South Korea and Taiwan – and by those of south Asia – India, Pakistan and, especially triumphantly this year, Sri Lanka.

The notorious trail of charges that are helping expose those south-east Asian fault-lines began when Anwar, now aged 67, was first accused of sodomy in September, 1998. This happened within days of his being sacked by then all-powerful prime minister Mahathir Mohamad, when he was deputy prime minister.

He was jailed for this offence and for corruption, and spent five years in solitary confinement before being released when the Federal Court finally overturned his sodomy conviction in 2004.

In 2008 he was charged again with sodomy under a private prosecution led by Muhammad Shafee Abdullah, a lawyer who is closely associated with Umno, the party that has dominated the ruling coalition since independence from Britain in 1957.

Anwar was acquitted in 2012, but the government won on appeal – which was in turn appealed, and the conviction eventually affirmed last Tuesday by the Federal Court.

Despite this constant drumbeat of prosecutions, Anwar constructed around his own People’s Justice Party (PKR), an opposition coalition – the Pakatan Rakyat or People’s Alliance – that has provided the most effective challenge in Malaysia’s history to the ruling Umno party.

This coalition won a majority of votes at the last election, in mid 2013, but was denied victory by a pro-rural gerrymander which ensured the Umno-led coalition, the Barisan Nasional, retained office.

During the election campaign, Najib, seeking to cement crucial middle-class votes, had pledged to repeal the notorious Sedition Act imposed in colonial days by Britain.

After retaining power, he announced the act would stay, and has used it more than 20 times to charge people for expressing “seditious” anti-government views, including in cartoons.

The director of Malaysian group Lawyers for Liberty, Eric Paulsen, said after being charged under the Sedition Act earlier this month for tweeting that the Islamic authority (Jakim) within the Prime Minister’s Department is “promoting extremism” through its widely distributed Friday sermons, “We must be holding the world record for sedition charges.”

But it is becoming a leviathan task for the government either to seduce or to suppress irritatingly oppositionist thinking and views in Malaysia today.

Clive Kessler, emeritus professor of sociology and anthropology at the University of NSW, said this is in part because the government “has always seen national society as consisting of a number of culturally distinct, socially separate segments, and which has sought to keep things that way, speaking in a different voice to each of these components of the mosaic.”

Now, though, in the age of the internet, it must communicate publicly, crossing those barriers and exposing its views – including those of Jakim – “for all to see and hear.”

For instance, Christopher Leong, president of the Malaysian Bar, picked apart the Anwar trial after the verdict.

He said it was notable that Anwar had not been charged with sexual coercion, which is provided for under section 377C of the Penal Code. The government, however, issued a statement after the verdict claiming that the case involved “serious sexual assault.”

Instead, Anwar has been prosecuted twice and now jailed for five years, as well as being disqualified from parliament for a further five years, for what Leong described as “an alleged offence of sexual acts between adults – what seems, on its face, to be a victimless offence” – which Anwar has denied took place.

The charge, Leong said, was based on a Penal Code provision “that has rarely been used,” concluding “it is a strange world that we live in.”

This is a world in which, increasingly, it is opposition leaders who are better known, especially internationally, than more authoritarian government leaders.

Yingluck Shinawatra is much better known than Prayut Chan-o-cha, the army commander-in-chief who seized power and removed her in Thailand.

And Anwar is better known than Najib.

Amanda Whiting, associate director, Malaysia, of Melbourne University’s Asian Law Centre, told The Australian that the Anwar case underlines how Malaysia’s judges don’t seem to be on the wavelength of “the liberal political and legal philosophy that underpins their own constitution,” which tends to be “misinterpreted or ignored.”

Increasingly since 2008, she said, Umno “is becoming more authoritarian and also more volatile and defensive. Many of the most draconian laws have gone – sedition is a crucial exception – but the mindset has not changed.”

The latest Federal Court verdict is a shock, Whiting said, “because more appointments to the bench were being made from the private Bar and recently several important civil liberties and constitutional rights cases have been decided by High Court judges against the state” – indicating that the separation of judicial and executive power survives.

“Yet the decision is also distressingly predictable,” she said, “because historically the apex court of final appeal in Malaysia has been most reluctant to decide a case against the state” – including questions of religious freedom and the rights of religious minorities – “revealing a deep confusion about the judicial role in a constitutional democracy.”

This departure from proper legal process and principles is more likely, she said, because the Umno government “channels political disputes into the courts, thereby inevitably distorting legal institutions and the legal process,” tying up opposition politicians and first rate litigators – many of whom are also politicians – in protracted and pointless court preparation and appearances.

And since Mahathir Mohamad started trying to “out-Islamize” the opposition party PAS, Whiting said, “state institutions have been increasingly stocked with Islamic ‘triumphalists’ who look to the machinery of the state to smuggle in an interpretation of the plainly secular constitution that better aligns with their view that Malaysia either always was, or will in the future be, an Islamic State.”

The result of this last week, as Bridget Welsh, a senior research associate at the Centre for East Asia Democratic Studies of the National Taiwan University, told The Australian, was that “Malaysia joined the ranks – again – of putting its opposition leader in jail.

“This is sadly common in South-east Asia – in Myanmar, and ongoing with the persecution of Yingluck Shinawatra in Thailand.

“These measures reflect a focus on leaders rather than the issues they represent – they put off challenges, but they are temporary measures that indicate weakness not strength.”

Rule of law issues in Malaysia are serious, she said. “There is the perception that the law is applied to suit those in office, not to serve justice. ‎Crime has risen and the focus centres on politics rather than public safety.”

This signals the likely end of Anwar ‎Ibrahim as a potential prime minister – thus allowing a new generation of younger leaders to rise. It also signals, she said, the difficulties Najib will face at the next polls, with this on his record.

Malaysians, she said, are fed up with “politics” – “the nastiness of it all, the infighting rather than problem solving. The country faces real challenges in the economy and governance, which are not receiving their due ‎as a result of this obsession with bringing the other side down.”

Further, said Welsh, “Malaysia’s standing globally took a big hit with this decision. As ASEAN chair and as a member of the UN Human Rights Council, this case will raise questions of hypocrisy.

“Malaysia’s standing in the area of justice and democratic governance has fallen. It has a hard time dealing with being in the shadow of a democratically confident, vibrant Indonesia, which is moving toward reform, albeit slowly” – a trend she no longer observes in Malaysia.

Malcolm Cook, senior fellow at the Institute of South-east Asian Studies in Singapore, said that this is a hot topic in the region: “The momentum for democratisation in South-east Asia that saw the Philippines, Thailand and Indonesia switch to democratic systems, Malaysian leaders post-Mahathir promise to loosen anti-democratic constraints, and Myanmar move away from the junta model, has stalled.

Thailand, for instance, reverted to military rule as the traditional elites refused to countenance a continued loss of power.

In the case of Malaysia, said Cook, “it is not really a democratic rollback or reversal, but rather hopes dashed that Malaysia post-Mahathir would become a more liberal polity.”

The democratising changes in Myanmar, he said, have been more than cosmetic – “but there are concerns and signs with an election looming that these reforms have slowed down, as well as economic ones. The army is still the real power” there.

The election of Jokowi in Indonesia and the roll-back of a last-minute attempt to stop the direct election of candidates for local positions are strong signs, Cook said, that Indonesian democracy is consolidating.

The political class there is broadening, he said, “beyond the traditional elites that still dominate in the rest of the region including in the Philippines. Indonesia is the beacon in the region – how very different from two decades ago.”