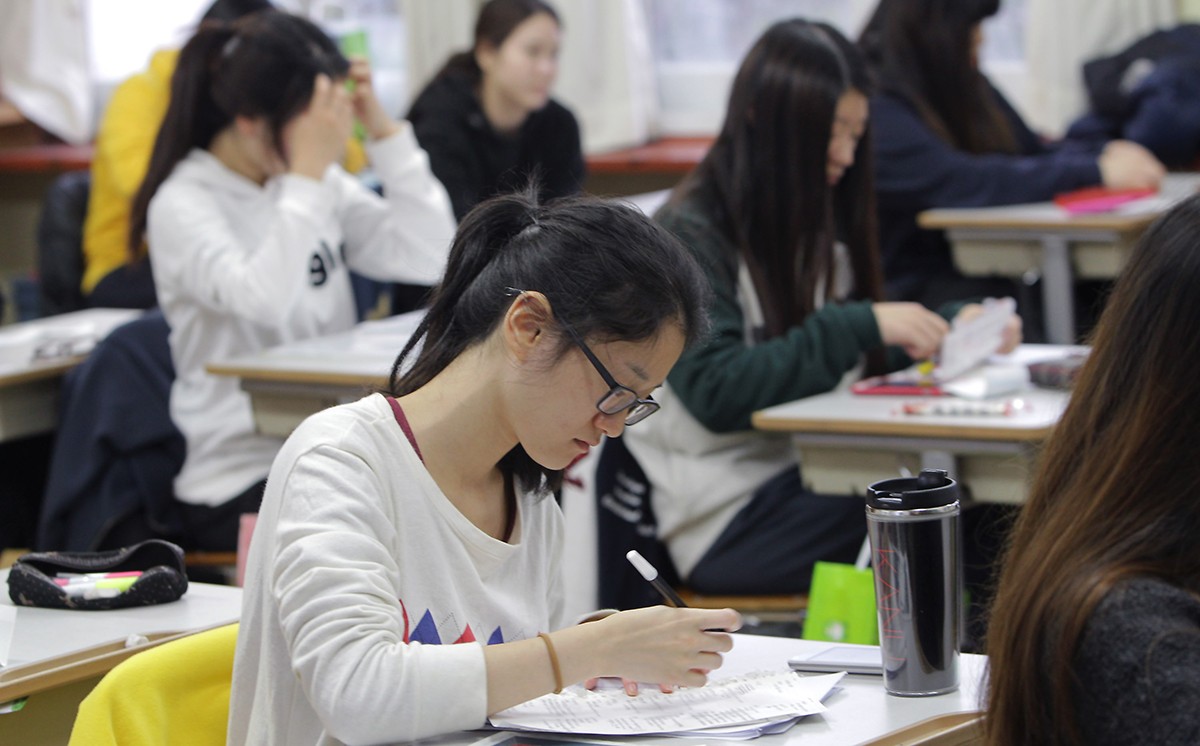 A typical middle class child in South Korea goes to school from 7.30am to 5.30pm, has a snack, then at least a couple of days a week travels to an after-school college, studies there from 6.30 to 10pm, then starts homework after returning to her or his home.

On Saturdays, they are likely to take piano and possibly art lessons, as well as some further academic tuition.

This arduous regimen applies to many primary school children as well as to most of those at high school.

The rest of the world, including Australia, is increasingly shamed by the test results of north Asian students into vowing to catch up with their stellar performance.

This is of course easier said than done.

And there’s a further question: what is the cost?

An English graduate, she now teaches maths and English at an after-school institution in Seoul.

“Parents are very nervous about their children not doing enough studies,” she says. “So they may send them to more than one extra institution, on top of school.

“It’s a crisis if a child really doesn’t want to study so intensely.”

Kang says she has hardly ever come across a child who only studies at school, even though most school days last 10 hours. Almost all, go to extra tuition classes.

Sometimes private tutors are hired to come into the home – “but usually this happens on the two ends,” she says – “either because the child is reluctant to study, or because they’re especially bright.”

Korea’s celebrity tutors chiefly operate in the home. Parents who hire the, want to minimise public exposure for their children. “It’s where privacy is a priority – for the parents also,” says Kang.

“Mostly, money doesn’t matter to these parents. The tutors they hire, tend to focus on maths and English. They guarantee good results, they come from prestigious universities. They have good communication skills with the students, and have a big reputation.”

A male friend of Kang’s teaches in a private school and also does some tutoring. “A parent offered him $A25,000 a month, only to teach her children, because she didn’t want him helping their potential competitors.

“He rejected the offer although of course the money was good – but maybe next year , he said, he might not have a regular job, and would no longer have such a reputation, since he’d be working for a single family.

“The reputation issue was the most important for him. I understand my friend’s decision, as well as the attitude of the parents, because it’s a very, very competitive world.”

The top tutors get plenty of exposure on cable TV and on the internet, she says, broadcasting their coaching sessions.

Classes delivered by internet might cost about $A120 a session, per child. “And mostly that’s cheaper than paying to go to an institution like mine,” says Kang, “which can cost from $A60 per chapter of a book up to $A600 a month.

“I prefer teaching face to face. Internet teaching is OK but there’s less feedback of course.

She says: “My students usually ask me any questions in the break-times, because of peer pressure which makes it hard for them to admit in sessions that they may not fully understand something.

“I have to watch their faces and read their expressions to assess their comprehension. If they don’t seem to have understood, I’ll repeat the problem or question again. That’s my teaching skill at work.”

Parents, she says, are usually highly concerned about controlling their children’s time, especially invigilating their internet use, and the amount of games they play.

The core focus of both parents and students is on tests.

“The ultimate goal of education is to go to university,” Kang says. “In high school, especially in maths and English classes, there’s no time to discuss any problems or questions the students may have because the syllabus is so full, and there’s big pressure on time efficiency, for both teachers and students. The curriculum is intensive.”

Unfortunately, she says, as students get older, the time available for discussion is reduced. “There’s no time for thinking creatively, or even for solving problems, in high school. They just have to memorise.

“They have to practise a lot, not think a lot. In maths especially, students have to follow the teacher’s instructions exactly. I try to provide some space in English for students to introduce some of their own ideas and skills – though the course still requires considerable vocabulary memorisation.”

She usually has about 30 students in a class. “Their parents are typically really nervous about their children’s future. They are eager for them to go to a prestigious university. Grades are more important than any other issue.

“The parents say their students should win the race, and will do so if they learn more before a subject even starts to be covered in class at high school.”

So the after-school college introduces them to the subjects they are to learn at school.

“In reality, says Kang, “often they just remember they have studied a subject, but don’t understand it 100 per cent.”

The system, she says, can create circular dilemmas, even for students who study a lot and parents who spend heavily on their education. The results are not always there.

“Between kinder and middle school,” she says, “some parents are prepared to think about creativity. They might take their children to a museum or to a foreign country, and allow them sufficient free time to communicate with each other.

“But as time goes by, especially in the last three years of high school, it gets hard to sustain that. They are focused on getting to university. Music, art, PE are part of high school curricula at first – but tend to fall away in the higher years.

“After entering university, the students often follow their own interests, and seek to express their creativity – which has been denied them in the previous few years. They start to follow their passions” – and some, naturally, just a little, freak out.

Only about 10 per cent of aspirant students can get to a university which is perceived as famous – “reaching the sky,” as the Korean phrase goes, gaining a place at Seoul or Korea or Yonsei Universities.

In the past, everything hinged on a single big test – but now school grades are also starting to be considered, as well as their own personal statements and interviews.

Inevitably, students’ parents pay for them to be tutored for such university interviews.

Kang admits: “The sheer volume of hours put in, can drive success. But I think many children simply don’t have enough time to sleep.

“At weekends parents tend to let them sleep in, and they are often so exhausted they will sleep all day. It’s all very stressful. We have a lot of tiger mothers and fathers.”