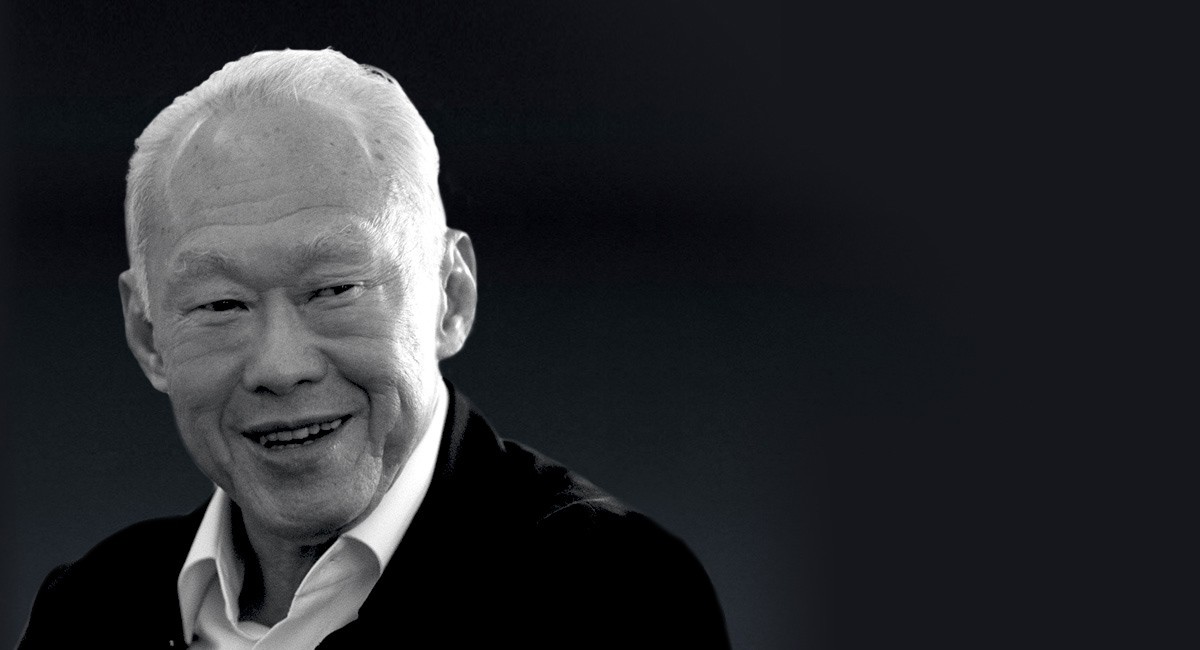 A true Asian giant has left the room.

Such figures do not only emerge from giant states.

In the last half century, the world’s most famous and respected figures have come from South Africa – Nelson Mandela, from Myanmar – Aung San Suu Kyi, and from Singapore, comprising a mere 1,000 square kilometres – Lee Kuan Yew.

Lee’s extraordinarily durable political career and his irrepressible personality encapsulate east Asia’s own rise, as does no other figure.

The Singapore that he did so much to position for prosperity, was ideally located, for a trading state, at the gateway of the Malacca Strait – as its modern founder Sir Stamford Raffles discerned two centuries ago.

But when he was growing up there, it was a relatively quiet British colonial backwater.

Lee’s own family slid from middle class comfort during the Great Depression of the 1920s, and during the Japanese occupation he worked as a clerk.

He worked for some time transcribing radio intercepts from Allied sources for the Japanese, but then as the tide turned he narrowly escaped being shot on a beach with a group of other Chinese men who were taken away in a truck – by asking a guard if he could collect some clothes from his home before joining the others.

His family sacrificed massively to ensure the children received the best possible education. That meant, in post war Singapore, England.

Lee graduated with a double first in law at Fitzwilliam College, Cambridge, and campaigned for friends in the Labour Party who won the ensuing election.

He returned to Singapore in 1949, determined to help his home city become self-dependent rather than relying on a Britain which had failed it so dramatically seven years earlier, when the Japanese forces raced down the Malay peninsula.

Lee would then have been viewed as a Leftist. The People’s Action Party he helped form was a broadly socialist party, with a strong alliance with trade unions. He was to lead the party for a further 38 years, and in many ways remained its leader until his death yesterday (Mon).

Step by step, the sure-footed Lee took the right decisions for the future of the tiny embryonic state.

It merged with Malaysia when that appeared the best way to leverage independence from the British.

Then, with reluctance and with genuine sadness five years later, he accepted the failure of this move – and looked for solutions to the pressing challenges that Singapore faced as an independent entity.

These included access to water, and a capacity to defend itself at a time when the Cold War was at its height, and the communist threat to east Asia was building, with China collapsing into the dangerous chaos of the Cultural Revolution.

Lee played a crucial role in the formation of the Association of South East Asian Nations in 1967, whose initial impetus comprised mutual protection against the rise of communism from within, and externally from the contagion of which the “domino theory” warned.

Singapore became a classic example of the Asian “guided democracy” in which the state played a strong hand in areas deemed important for defence and national identity, but in which capitalist endeavour was prized.

As the danger of communism eased, Lee himself began to guide Singapore towards a different ethos, one in which he was supported by his Malaysian counterpart Mahathir Mohamad, who was prime minister for 22 years until 2003.

Their personal relationship remained awkward at best, but together they propagated the concept of Asian Values as an alternative both to communism and to Western liberalism.

The prophet of Asian Values was the ancient Chinese philosopher Confucius. The leaders took from Confucius, their understanding of his approach to respect for elders, for authority, and for family.

In his introduction to the Analects of Confucius, the late Pierre Ryckmans, the great Australia-based Sinologist, writing as Simon Leys, referred scathingly to Lee’s efforts to propagate “the magic recipe – supposedly found in Confucius – for marrying authoritarian politics with capitalist prosperity”.

It was substantially through this connection, however, that Singapore provided a compelling development model for recent generations of Chinese leaders.

It is remarkable that a city-state of just 5.5 million can thus provide a template for a country the size of China. But much of what Lee and his compatriots have accomplished, is understandably highly attractive for China’s rulers.

Singapore has become extraordinarily prosperous. Its average annual gross domestic product of $A71,683 per person is about five times that of neighbouring Malaysia, from which it emerged.

It is a stable community where law and order largely holds sway, where corruption is constrained, where order and decency are fostered and largely upheld.

And – by no means least in Beijing’s thinking – it is a state where a single party has remained in power for about six decades, and which although starting to face genuine electoral opposition, retains the capacity to keep winning elections.

But Lee himself, while greatly admiring Deng Xiaoping in particular, was far from an acolyte of the Chinese communist party. He was, despite his continuing espousal of a certain Englishness, impeccably Chinese in a cultural sense but not in a mainland political sense.

Lee was a figure who generated extraordinary respect in Singapore, as throughout Asia and the wider world, without seeking to become loved. He preferred a Confucian role to that of Western style populism. He especially sought – and delivered – efficiency and productivity.

He did not encourage a personality cult. He was not sentimental or nostalgic. There are few if any statues of him extant.

But his family became – and remains – deeply immersed in all the power positions of the state, to an extent that the Lee clan, rather than the dynasty’s founder Lee Kuan Yew, might be seen as incorporating Singapore itself.

For instance his elder son, Lee Hsien Loong, has been prime minister for 11 years, while Hsien Loong’s wife, Ho Ching, is chief executive of the state-owned finance giant Temasek Holdings, one of the world’s largest sovereign wealth holdings, while another son, Lee Hsien Yang, is chairman of the Civil Aviation Authority.

Lee Kuan Yew said in a 2008 speech: “Many people say, ‘Why don’t we open up, then you have two big parties and one party always ready to take over?’

“I do not believe that for a single moment. We do not have the numbers to ensure that we’ll always have an A Team and an alternative A Team. I’ve tried it; it’s just not possible.”

His family members clearly comprise this A team. Alongside them are a cadre of highly educated, accomplished managers.

But as Lee Kuan Yew began to shed positions – though he remained in the Cabinet led by his son, until his death – the economic times began to shift, and Singapore began to seem for once behind the times.

It appeared to lack the innovative skills needed to adapt to rapid technological change.

The strictness of Singapore that had earned respect, began to look outmoded, and to act as a constraint on creativity.

Tee shirts appeared everywhere proclaiming: “Singapore is a fine country” – where everything was still fined, from spitting to chewing gum.

Questions began to be asked, including: does Singapore respect the rule of law, or is it ruled by law?

It has been the tough task of Lee’s son to oversee the transition from the straight-laced Confucian state to one which is more yielding, where greater acknowledgement is paid to artists, to inventors, even to those who may appear eccentric or politically questioning.

Singapore has succeeded in subtle reinventing itself to the extent that opposition politicians are no longer invariably harassed, often in the past through legal pursuit whose goal was to bankrupt them.

It has retained the loyalty of most of its smart Generations X and Y citizens, many of whom have become sufficiently well educated to take their portable skills elsewhere in the world.

Lee Kuan Yew himself demonstrated a durable capacity to adapt his thinking to the times. He did not permit himself to be tied down, by that earlier Asian Values construct, to fatalism about the West – especially after the salutary experience of the Asian financial crisis of 1997-1998.

When he was 89, he published an anthology of recent material that exemplified his continuing intelligence and incisiveness.

In it he asserted: “America’s creativity, resilience and innovative spirit will allow it to confront its core problems, overcome them, and regain competitiveness” – although he felt the “Asia pivot” pointed to policy problems.

He said: “If the US wants to substantially affect the strategic evolution of Asia, it cannot come and go.”’

He said that the very name China – Zhongguo, or Middle Kingdom – recalled a region in which it was dominant.

He asked: “Will an industrialised and strong China be as benign to Southeast Asia as the US has been since 1945? Singapore is not sure. Neither is Brunei, Indonesia, Malaysia, the Philippines, Thailand or Vietnam.”

He said they are “uneasy that China may want to resume the imperial status it had in earlier centuries, and have misgivings as being treated as vassal states.

“When we do something they do not like, they say you have made 1.3 billion people unhappy. So please know your place.”

He urged the Chinese to “avoid the mistakes made by Germany and Japan. Their competition for power, influence and resources led in the last century to two terrible wars. The Russian mistake was that they put so much into military expenditure and so little into civilian technology that their economy collapsed.

“I believe the Chinese leadership has learned that if you compete with America in armaments, you will lose. You will bankrupt yourself. So keep your head down, and smile for 40 or 50 years.”

He said: “If you believe there is going to be a revolution of some sort in China for democracy, you are wrong,” because the party believes it needs a monopoly on power for stability.

And he said of China’s powerful president Xi Jinping: “There is always a pleasant smile on his face, whether or not you have said something that annoyed him. He has iron in his soul.”

Since then, however, as Australia prospered, through and beyond the Asian financial crisis, Singapore has become a huge investor here, from Optus to Sydney’s landmark Queen Victoria Building to Tiger Airways.

Singapore was one of Australia’s first free trade partners. The countries are assiduous members of the Five Power Defence Arrangements that also incorporate New Zealand, Malaysia and Britain.

When Australia hosted the G20 summit last year, Singapore and NZ were the countries which it invited to join the table. The relationship is today remarkably close.

Partly for that reason, Lee’s warnings continue to reverberate whenever, as now, Australia faces important choices and transition.

Richard Nixon said that if had Lee lived in another time and another place, he might have “attained the world stature of a Churchill, a Disraeli, or a Gladstone.”

Nixon was wrong. That Lee lived in Singapore in the latter 20th century did not one iota constrain him from striding the world in a way which those British leaders would have admired.