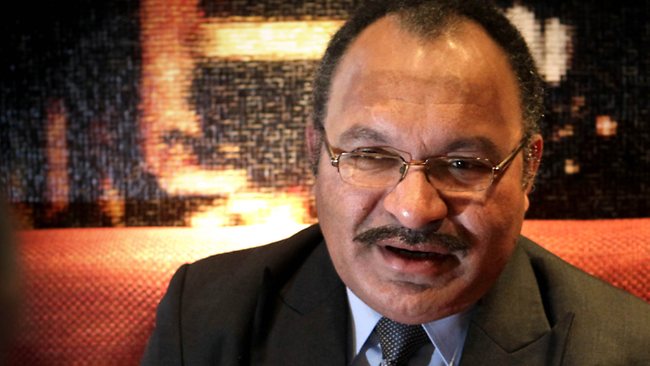 Only one head of a foreign government flew to Melbourne for the state funeral of Malcolm Fraser last Friday.

That was Peter O’Neill, Prime Minister of Papua New Guinea.

Whatever that says about Fraser, more importantly it underlines the closeness between PNG and Australia – which often appears to be a one-way street, with Australians knowing less about PNG as each generation succeeds the next.

O’Neill himself has emerged as a remarkable figure in PNG’s usually battle-scarred political landscape, which makes Game of Thrones look tame.

He has suffered criticism for the peremptory manner of his government’s takeover of Ok Tedi mine, and for the failure to clear up the cloud of corruption that lurks over well-attested collusion between public service heads, lawyers and others to steal hundreds of millions of dollars of public funds.

But he has emerged as an almost irrepressible force in the nation, with a growing role in the Pacific islands region and as a link between the islands and Asia.

O’Neill told The Australian during his visit for the funeral that he had met Malcolm Fraser on several occasions.

Fraser, he said, had helped PNG attain independence under Gough Whitlam, and had supported the country through its early years – after becoming prime minister just two months after that event.

“That’s why I came, to pay our respects to him and his family. We really appreciated that bipartisan support in Australia.”

Fraser had described for archives how as Defence Minister, he prevented Prime Minister John Gorton from circumventing the usual process for calling out troops during the Mataungan uprising in East New Britain, PNG, in 1970.

Five months after Fraser ceased to be Defence Minister in 1971, and after he had succeeded in holding back troop deployment, the respected district commissioner there, Jack Emanuel, was killed by Mataungan supporters.

O’Neill said that sending in the army then, would have made the situation even worse, however. He said that Fraser was especially remembered for helping establish in PNG’s early years, “good funding arrangements directly supporting the budget.”

Even though Australian aid – $577 million this financial year – is much smaller today as a proportion of the whole PNG budget, O’Neill said, it remains significant, and ensures Australia retains a high presence in the country.

He said that despite criticisms that PNG was not ready for independence, the country had remained “a very robust democracy” through the ensuing decades, “withstanding many tests.”

The Manus asylum seeker processing centre had been established 14 years ago, and reopened in late 2013, because PNG saw that “our friends in Australia needed help, and that many lives – about 2,000 by then – were being lost at sea.”

He regretted that Australian media had “played up to this in a very aggressive manner, portraying PNG as an undesirable place to live.”

But now that the PNG government had taken control of the centre’s administration, he said, the situation there was calm, with growing numbers “quietly” agreeing to return to their home countries.

Refugees being settled within PNG were pleased with the scheme, and PNG communities had been welcoming, he said: “It’s obvious we are on the right track, and the sooner we resettle many of the asylum seekers, after processing, the better for everyone.”

He said that “we need to see the details” of Foreign Minister Julie Bishop’s new aid program that is designed to work closely with the private sector.

“But we have a very good understanding with the Australian government, and at our annual ministerial forum with Australia we review how these programs perform.

“Our own approach is to refocus priorities not only on social services led by education and health but also on building infrastructure, and that is starting to show good outcomes.

“We are getting the Australians to align their aid programs with our government’s priorities, to reduce duplication and maximise limited resources.”

He said that PNG was facing some of the same challenges as Australia, in managing the commodities downturn, with minerals and energy providing more than 80 per cent of the country’s export earnings.

O’Neill said that in framing the 2015 budget, revenue expectations – including from the country’s major new earner, liquefied natural gas – were not clearly articulated, “so we didn’t capture much of that in our funding projections for this year and next.”

This has proven helpful, as prices for some of PNG’s biggest exports have kept falling.

“We will play it by ear,” he said, “and may need to make adjustments at the next budget, but we are giving the 2015 budget a chance to perform. It’s early to talk about a supplementary budget.”

And, he said, the country is starting to receive some revenues from LNG sales that were not captured in the budget estimates, because production began earlier than planned.

“All in all, we are being conservative, knowing that global conditions are uncertain.”

The government is starting to sell shares in some of its state owned companies. But this does not amount to privatisation, O’Neill insists.

Instead, he said, “we are raising capital to expand these businesses’ operations for the benefit of our own citizens, and of their customers.”

First cab off this rank will be a minority stake in the national carrier, Air Niugini. “We are committed to expanding its fleet, especially to increase flights to and from Asia.”

“But we shall maintain PNG ownership of such assets, and the first option to buy shares will be provided to our citizens. If demand is not there, we shall then look to other options.

“The state will continue, however, to hold substantial shares – ensuring security and regulatory stability for the relevant industries. We are not doing this to raise revenue for government – we are doing so to expand services.

If the Air Niugini sale works well, he said, then the government’s monopoly electricity utility, PNG Power, will follow when it is ready for market.

But the PNG Power accounts “are in a mess,” he said, “and they need to be cleaned up first.”

The prime minister said that PNG’s model for this phase of its development is south-east Asia, and especially Singapore, “where successful corporations such as its airline have retained substantial state shareholdings.”

“This is a model we are trying to follow,” he said – “moving away from direct government control,” with professional business managements and “with substantial ownership through sovereign wealth funds and superannuation funds, but where mums and dads can also take a stake.”

O’Neill is thus making plans that will take his administration through to the next election, due in mid 2017, and beyond.

This marks a change from the more familiar political past, when at such a stage in most parliaments, prime ministers were forced to focus on shoring up their support against votes of no confidence – often backed by MPs from within the government’s own ranks.

But O’Neill is the most powerful politician PNG has produced since Michael Somare – who remains, astonishingly, in parliament, 40 years on – during the independence era.

Jan Kees van Donge, political science professor at the University of PNG, wrote recently on the Development Policy website at the Australian National University, that O’Neill “manages to deflect criticism of his person and performance by diverting the debate to development.

“He is a master at creating a discourse in which he considers governance issues as secondary to his great scheme to break the stagnation or lack of implementation in PNG’s administration.

“Besides that, he identifies with worthy issues that are above political controversy, such as fighting domestic violence or campaigning against the spread of tuberculosis.”

Van Donge concluded: “O’Neill is popular, and there is nothing to be gained by going against him.”

O’Neill himself told The Australian that his support in the parliament is close to 100 of the 111 members.

He ascribes this to their viewing the government’s performance, and noting that “people are happy about our focus on key programs, which are being delivered – such as free education, and free health care.”

He said: “Of course, there have been some teething problems, but that happens to any program. We have, though, been reaching the majority of people.”

This is producing a virtuous circle, he said, in which “good government performance is providing confidence to MPs and to their communities,” who are backing the government, providing it with stability from which it in turn is encouraging the politicians and their local leaders to work together.

O’Neill strongly disagreed with the criticism that MPs’ loyalty has primarily been obtained by a massive and growing proportion of government spending being disbursed through constituency committees they control.

That funding, he said, is being distributed “through structured government agencies, implementing government programs.”

This is beginning to address for the first time in 40 years, he said, the maintenance of infrastructure – of health centres, classrooms and run-down roads.

“People who had lost hope are starting to see light at the end of the tunnel, with development happening as they had expected.”

In his own constituency, for instance, the district committee had instituted a “zero-tolerance” approach to potholes, he said, so that they are now all fixed within 24 hours.

Corruption remains a big issue for PNG, where conspiracy theories multiply in an environment in which state theft appears common.

O’Neill said that legislation is ready for the May sitting of parliament, to introduce an Independent Commission Against Corruption.

“But some government agencies are being politically compromised,” he said. “In an environment in which votes of no confidence in the parliament can’t succeed, our critics turn to such agencies in seeking to destabilise us.”

He said that “each individual case will be brought before the courts” of senior officials or politicians who appear to have conspired to steal public funds.

He has been accused of issuing a letter authorising payments to prominent lawyer Paul Paraka. “The signature appears to be mine,” he said. “But the letter didn’t originate from my office, and they can’t find the original.”

Some police officers, he said, had taken this matter up personally. It is now before the courts.

Despite the constant airing of rumours through PNG’s lively and sometimes toxic social media, O’Neill said he trusted that “Papua New Guineans are very knowledgeable people, and will make their determination at the appropriate time.”

His opponents’ attempt to use social media to destabilise the government had backfired, he said, due to lack of evidence. “People get tired of it after a while.”

This September, during the 40th anniversary of independence, O’Neill will host the Pacific Islands Forum leaders summit – and then two years later, the more challenging APEC summit, which will see the American, Chinese and Russian leaders arrive in Port Moresby.

Typically, O’Neill is confident that PNG will meet the immense challenges that such events present: “People who come to Port Moresby at these times will have a pleasant surprise.

“They will see the country experiencing rapid economic growth, and delivering basic services to our people, with new infrastructure that is starting to work.

“I am looking forward to hosting these events, to showcase what the nation has achieved – and in the APEC case, introducing a note of informality that people will enjoy.”