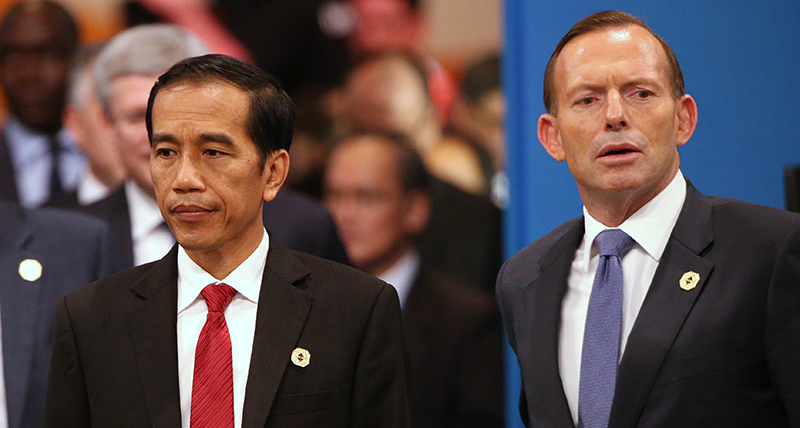 Right now, the questions uppermost in many Australia minds are clear.

They are, how can we make Indonesia’s political class know just how much we detest what they’ve done to Andrew Chan and Myuran Sukumaran?

And what more can we do to punish them, besides the somewhat esoteric diplomatic measure of withdrawing our ambassador, Paul Grigson – a move Indonesia has itself made twice in the last decade?

The relationship with Indonesia has been here before. Indeed, the Timor Sea that separates us might well be renamed the Dire Straits.

The highs and lows have been intensified both by our proximity which causes our failures and successes to be highlighted, and also by our mutual lack of understanding, of engagement between our peoples beyond brief holidays.

For this reason, urges Tim Lindsey, the director of the Centre for Indonesian Law, Islam and Society at Melbourne University, “I think it is vital that this not be simply an Australia-Indonesia issue.

“We need to join with other countries – including possibly the UN, whose secretary-general Ban Ki-moon has intervened twice on the issue – to make it multilateral.

“We lack leverage and will be too exposed on our own.”

In the dark hours of yesterday (Wed) morning, Indonesia executed four Nigerians, a Brazilian and an Indonesian as well as the two Australians – while a Filipina and a Frenchman were given temporary reprieves.

In January President Joko Widodo approved the execution of citizens of Brazil, Malawi, the Netherlands, Nigeria and Vietnam, all also convicted of drugs charges.

With Brazil and Holland also already withdrawing their ambassadors, if Widodo carries through his pledge to execute the scores more of foreigners on death row, Jakarta’s diplomatic corps could end up as a very thin residual group.

Indonesia is one of only a handful of countries that still today executes people for such offences. Capital punishment is otherwise carried out worldwide overwhelmingly for forms of murder.

Gathering international support to press Jakarta to halt what is turning into a wave of state-conducted massacres of drug traffickers, will provide a fresh test of the impressive calibre of already over-burdened Foreign Minister Julie Bishop.

But Australia’s success in its temporary role on the UN Security Council which expired at the start of this year will provide Canberra with a handy base for ratcheting up global opposition to the recalcitrance of beleaguered Jokowi and Indonesian parliamentarians on this issue.

Back home, the executions themselves only comprise the first round of public anguish.

More will come with the funerals of Chan and Sukumaran, likely to be occasions of extraordinary grief, which will intensify those demands of Australians for “action.”

Beyond shifting holidays from Bali – which many Australians scarcely regard as part of Indonesia – to newly democratic Fiji, there is not much that individuals can do, however, in part because the people-to-people links between the countries have remained remarkably thin for such close neighbours.

And Australians have already been flying to holiday in Bali in increasing numbers this year, despite Indonesia’s intention to execute Chan and Sukumaran.

In January and February, 156,424 Australians travelled to Bali, up 16.74 per cent on the same period in 2014. More Australians visited Bali than any other nationality – comprising about a quarter of the total – followed by Chinese tourists.

The Indonesian rupiah has been falling virtually in tandem with the Australian dollar, so that Australians do not suffer from a worsening exchange rate which is causing many other international destinations to become more costly.

Ross Taylor, president of the Perth-based Indonesia Institute, said – before the executions – that “the more ‘thinking’ Australians have worked out that Bali is 1,300km away from Jakarta, where these death sentence decisions are made.”

He foreshadowed that a new ban on alcohol sales might have a considerably greater impact on Australian tourism. However, the legislation – pushed through parliament by two Islamic parties a fortnight ago – applies principally to convenience stores, and exempts certain locations to protect tourism, including five-star hotels and the island of Bali.

Business measures are not likely to prove especially effective either in “punishing” those who approved the executions. Again given the size of the Indonesian market and its rapid economic growth in recent years, Australia is only modestly engaged there.

Our investments in Indonesia, for example, are half those in that other neighbour, Papua New Guinea.

That leaves many talkback radio callers and social media users suggesting we cut or shift, maybe to Nepal, our government aid to Indonesia – $605 million this financial year.

But where is that aid targeted?

Among other goals, to provide support to and help combat corruption in Indonesia’s law and justice sector – which the Bali Nine cases underline, remains in serious need of reform – to improve the way local governments deliver basic services such as education, water and sanitation, to help address the health needs of women and children, tackle HIV, malaria and emerging infectious diseases.

The problem with attacking such aid is that the impact tends to be felt by many thousands of ordinary folk, but not at all by those responsible for the issue at hand.

It would not touch Widodo himself, for whom the killing of foreigners is readily deployed within the domestic political framework as a demonstration of strength of character, of resolve that otherwise appears to have evaporated as his presidency has been subsumed within the resurrected political caravanserai of his patron Megawati Sukarnoputri, his least competent predecessor to date.

The lack of dignity surrounding the executions, and the lack of respect that led to requests from Australia’s Prime Minister and Foreign Minister going unanswered, have reinforced this perception of incompetence, even of goodwill.

In stark contrast, some Indonesian figures emerge from this appalling episode with enhanced dignity.

Chief among them is Todung Mulya Lubis, the Australian victims’ leading lawyer, who has dedicated his distinguished career to working towards an honest and fair legal system that reflects human rights.

He was director of Indonesia’s most famous dissident NGO, the Legal Aid Foundation, which under the Suharto regime led to his office being broken into, and to death threats. Even now, he needs a bodyguard in Jakarta.

On a visit to Australia last year, where Melbourne Law School appointed him an honorary professor, he said that still today, “many perceive the legal apparatus, including the judiciary, as having become an instrument of those who have the means to buy its support.”

Lubis, a strong and consistent campaigner against the death penalty in Indonesia, had been optimistic, as the Widodo presidency began, that he was a president who could finally put into place the aspiration of the 1945 constitution that Indonesia should be a nation based on negara hukum, the rule of law.

But immediately after the executions yesterday, the exhausted Lubis tweeted: “I failed. I lost. I am sorry.”

Lindsey, a long-term friend of Lubis, and chairman of the Australia Indonesia Institute, told The Australian that “these killings will taint President Widodo’s dealings with Australia for the rest of his current term.

“It will probably make it impossible now to develop the sort of relationship that Australia had with President Susilo Bambang Yudhoyono, which for all its ups and downs, was overall a real boon for Australia. “

He said: “There will always be tensions in the relationship between neighbouring countries that are so different, but a warm working relationship with the president allows them to be managed much more effectively.

“The absence of this key platform for cooperation, together with the fact that Widodo’s government is fragmented, weak and greatly influenced by inward-looking conservatives, suggests very difficult times ahead for the bilateral relationship.”

Malcolm Cook, senior fellow at Singapore’s Institute of Southeast Asian Studies, agreed, saying that the executions “should act as a reality check on the limits of Australia-Indonesia relations and Australian influence in Indonesia.

“They clearly reinforce the large cultural, ethical and policy differences between the two countries today. The executions also reinforce the counter-productive nature of diplomatic pressure on Indonesia over what it views as internal matters.”

Cook highlighted the almost-universal view among such experts, that the two SBY terms were the best for Australia-Indonesia relations. “So far, this judgement is standing the test of time.”

He said: “The Jokowi administration, as shown by the sinking of Vietnamese fishing boats, stronger language on its maritime boundary dispute with China in the South China Sea and these eight executions, is quite nationalistic.

“From its first days in office, the administration has been sensitive to what it perceives as foreigners and particularly foreign governments not treating Indonesia with the respect and dignity it feels Indonesia deserves.”

Michael Wesley, the director of the Coral Bell School of Asia Pacific Affairs at the Australian National University, expects that at the official level there will be a freezing of high level contacts but that the normal process of on-the-ground engagement will continue.

“The big unknown is nationalism on both sides,” he said. “There’s some pretty nasty stuff coming out on Twitter in Australia, and the chances of that starting to drive nationalism in Indonesia are pretty high.

“My worry is that the round of executions – not just the Australians – will have the effect of deepening the sense of isolation and nationalism among Jokowi and his foreign affairs team.

“We’ve already seen what a retail, low-horizoned politician he is. How he will react to an impassioned Indonesian nationalism is likely to be very different from SBY”.

The Lowy Institute’s Indonesia expert Aaron Connelly has a markedly different take, expressing concern that those seeking an explanation have “attributed a malevolence to Jokowi for which there is little evidence.”

He said that instead, “Jokowi is motivated by the zeal of a reformer, albeit one with a very different sense than most Australians of what constitutes reform.”

Andrew O’Neil, head of the School of Government and International Relations at Griffith University, said: “My take is that this episode will follow a pretty standard path in the bilateral relationship.

“The aggrieved party will take a demonstrable measure to register displeasure and to address public opinion – the withdrawal of the ambassador – but not do anything likely to do damage to the underlying relationship.

“I certainly think there’s an extra edge to this because of Tony Abbott’s and Julie Bishop’s relationships with the families, but my belief is that they have a clear sense of how this will play out in time.

“In a sense this is quite analogous to the spying controversy in 2013, when SBY recalled the ambassador in Canberra. It will be a bit turbulent for a while, but the Australian foreign policy elites have prepared for this eventuality for some time and will not let it get out of control.

“The challenging part will be managing a domestic backlash that may be harder to predict, particularly if the Opposition pushes the line that the Abbott government could have tried harder.”

So far, however, that hasn’t happened, and despite the inevitable social media trolls parading their grisly relish for capital punishment, the compassionate Australian core remains for now crushed and united by the events on Nusakambangan, Execution Island – and genuinely puzzled as to where our relationship with Indonesia goes from here.