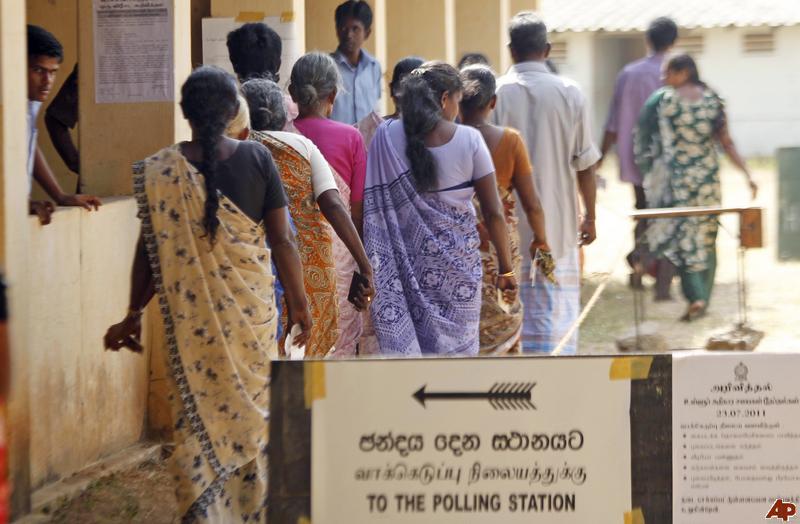 Today, 15 million Sri Lankans can vote for their president, in an election that had appeared set up as a victory parade for 69-year-old Mahinda Rajapaksa, in his tenth year in the job.

He had sought to capitalise on strong economic growth – 7 per cent a year, with official unemployment just 4 per cent – to reinforce his mantle as the man who ended the country’s catastrophic 26 years civil war when, in November, he called an election two years early.

But just six weeks ago, Maithripala Sirisena, who was Rajapaksa’s health minister and general secretary of his ruling Sri Lanka Freedom Party, broke ranks and became a candidate.

This posed an immediate threat, because Sirisena, a 63 year old veteran parliamentarian for 25 years, took several other ministers with him among 21 MPs, and is set to win the support of a substantial minority of SLFP voters.

He has also gained the backing of the major opposition group, the United National Party, and of the Tamil National Alliance (TNA).

So the scene is set instead for a close and intense election day, when either leading candidate could win.

Rajapaksa’s supporters have branded Sirisena a traitor, while the president himself has urged even Tamils – whom he is accused of having persecuted – to back him as the “known devil.”

Australian economist Peter Drysdale said in the East Asia Forum website he edits: “The president is a charismatic campaigner who has worked assiduously at using the advantages of incumbency to secure his tenure.

“He’s built what looks, to many, like something of a personality cult with giant hoardings of his smiling, well-oiled image along the highways and a family mausoleum in his home town.”

All four of his brothers are politicians – including the defence and economic development ministers, and the parliamentary speaker – and so is his son.

Rajapaksa said last weekend on his 11th visit as president to Tamil centre Jaffna: “The devil you know is better than the unknown angel… We gave you electricity, we gave you new schools, and now want to give you proper water supplies.”

There have already been many allegations of abuse of government machinery, including the army and police, in order to attempt to influence the result.

But the chief electoral commissioner of India, S Y Quraishi, the most senior of a large number of international experts observing the conduct of the poll, said that despite these claims, Sri Lanka’s electoral commission remained confident it would hold a free and fair election today.

What is at stake?

In international terms, Rajapaksa is perceived as being especially close to China – with Sri Lanka playing an important strategic role in the development of President Xi Jinping’s “Maritime Silk Road”.

Anushka Wijesinha, a research economist at Sri Lanka’s Institute of Policy Studies (IPS), said that many of the projects that have driven post-war growth have been fully or partly funded through Chinese loans, with china also becoming the largest foreign direct investor.

Most of the new investment has gone into real estate and tourism, he said – but little into industry, although Australian firm Ansell’s rubber products plant at Biyagama is one of the largest foreign investments in manufacturing.

Education, he said, “continues to be a critical constraint in Sri Lanka’s forward-and-onward march.”

Australia has three tertiary education involvements there – Monash College, an affiliate of the university, the Australian College of Business and Technology, an affiliate of Edith Cowan University, and a distance learning program provided by the University of Southern Queensland through Sri Lanka’s Institute of Chartered Accountants.

The aspirations of Sri Lanka’s people are changing, said Wijesinha, and “catering to those desires, particularly in the growing urban class, will be a key challenge.”

As basic needs are met, he said, “people’s aspirations of greater political rights and freedoms will come strongly to the fore.”

Rajapaksa is disconcerted by persisting attacks from Western countries, for which human rights issues and advocates have driven their relationships with Sri Lanka, still focusing on the manner of the concluding campaign of the civil war.

His government has, however, developed especially close relations with Australian administrations, both coalition and Labor – actively cooperating to help prevent asylum seekers setting out on boats to Australia.

Rajapaksa said during the campaign: “We won the war, we restored stability. I did not want to mix up my priorities,” so he had dedicated his first term to that achievement.

Now his focus, he said, would be to tackle corruption and poverty – relying on his “action man” image rather than on a suite of policies. “Achieving results,” he said, “is good governance. Not achieving results is corruption.”

The strategies of the government, he said, made voters “partners in this pattern of progress.” The private sector, he said, should take its “rightful place in the forward march.”

Sirisena is no proxy for Western human rights campaigners: “I have no intention of withdrawing the army from the north,” he said during the campaign. “As president, national security will be my responsibility.”

He said he would not allow the country to be divided. His track record would support that – he was acting defence minister during the final days of the civil war.

Sarath Fonseka, the general who led the victorious campaign and who won 40 per cent support at the 2010 presidential election – after which he was jailed for two years for “military offences” – is backing Sirisena.

Sirisena said in launching his campaign: “I came out because I could not stay any more with a leader who has plundered the country, government and national wealth.”

The clean-living candidate, who has renounced alcohol and campaigns against smoking, presents himself as the voice of the country’s farming heartland.

He has pledged to cancel a $A 1.7 billion deal with China Communications Construction to build a port city, and to cancel three casino licences held by foreign companies.

One of the licences has been granted to James Packer’s Crown group, which plans a $A 450 million resort in Sri Lanka, through a deal that includes a 10-year tax break.

He says he will establish an independent agency to consider war crimes allegations, as well as independent commissions with oversight of the judiciary, police and public service.

He also advocates a radical constitutional restructuring, with most of the government’s executive powers held through the parliament rather than through the office of president.

Whoever becomes president tonight, said Dushni Weerakoon, deputy director of the IPS, perceptions of continuing political stability will be crucial: “Even the best-laid economic reform package will fail to deliver on long term prosperity if the country loses this most significant post-war asset.”

Rohan Gunaratna, professor of security studies at Singapore’s Nanyang Technology University, who comes from Sri Lanka, told The Australian: “The Rajapaksa regime is credited for not only ending terrorism but for preventing a revival.

“Since the Rajapaksa regime restored peace five years ago, the weak opposition has steadfastly organized and gathered momentum. Today, rebuilding the economy and strengthening governance are the key issues.

“There is no real difference between government and the opposition – both advocate a free market economy. The exception is that the opposition seeks closer ties with the west.”

He said that irrespective of who comes to power, the government will ensure that security remains a priority. “Cooperation with Australia will continue, as it has strengthened Sri Lankan intelligence and operational capabilities to fight both terrorism and crime.”

“As long as the Liberation Tigers of Tamil Eelam movement is intact overseas and its proxy the TNA has not abandoned separatism, the threat of resurgence is very real.

“Although most Tamils advocate peace, a segment of the diaspora that supported the LTTE for 30 years is determined to revive the LTTE at home.”

He said that Sri Lanka learned from “the failure of the world’s finest armies in conflict zones.” In Iraq and Afghanistan, after victory was declared, terrorism re-emerged because security forces did not maintain a presence.

“Sri Lanka’s success,” he said, “was in developing and sustaining wide ranging programs to rehabilitate and reintegrate terrorist fighters, demine, and economically develop the north and east.

“The continuing security presence is critical for Sri Lanka’s long term national and strategic interests, and the stability and security of the region.”

Although the war has receded to the background, Monash university economics professor Sisira Jayasuriya – who is in Sri Lanka – told The Australian, the cost of living and corruption have emerged as major issues.

But the war remains a powerful pro-Rajapaksa factor, on which government propaganda focuses.

“The consensus here is that it will be very close,” he said. “A clear swing for change is discernible.”

He expected that people would not vote so much on ethnic lines as before. “But among the Tamils, the scars of war are still very strong, and this will mean a strongly anti- Rajapaksa vote.

“The sense I get is that a significant, previously pro-Rajapaksa, stratum want to move on to a more normal post- war situation. Everything depends on how big this group is.”

He does not expect a major change in the relationship with the Australian government or on the asylum seeker issue whoever wins, he said – although the apparent “pro-Rajapaksa bias of Tony Abbot” has been an irritant.

Larry Marshall, a research associate at La Trobe University’s Centre for Dialogue, who was born in Sri Lanka, said that although the appreciation for bringing the war to an end remains strong, General Fonseka, “who was a respected part of the victory,” is back as part of the broad, and growing, opposition coalition – also joined by Chandrika Kumaratunge, president from 1994-2005 and then leader of the SLFP.

While the former voting along ethnic lines is breaking down, Marshall said that ethnic voting remained strong among “minorities that feel betrayed by the regime – the Muslims who have come under attack from extreme Sinhala/Buddhist nationalists, and many Tamils still waiting for recommendations of the government’s own Lessons Learnt and Reconciliation Commission to be implemented to help them feel a part of this new ‘united’ Sri Lanka.”

Some voters, he said, “feel that the benefits of post-war development are not ‘trickling down,’ with major issues of massive corruption and abuses of power seemingly commonplace.”

Many, he said, want a transition to a post-war climate that includes real reconciliation and some careful power-sharing from the centre to the provinces, which would reduce the boat-people push factor.

Today Sri Lanka faces a turning point that provides a rare moment in global politics – an election whose outcome is genuinely unpredictable.