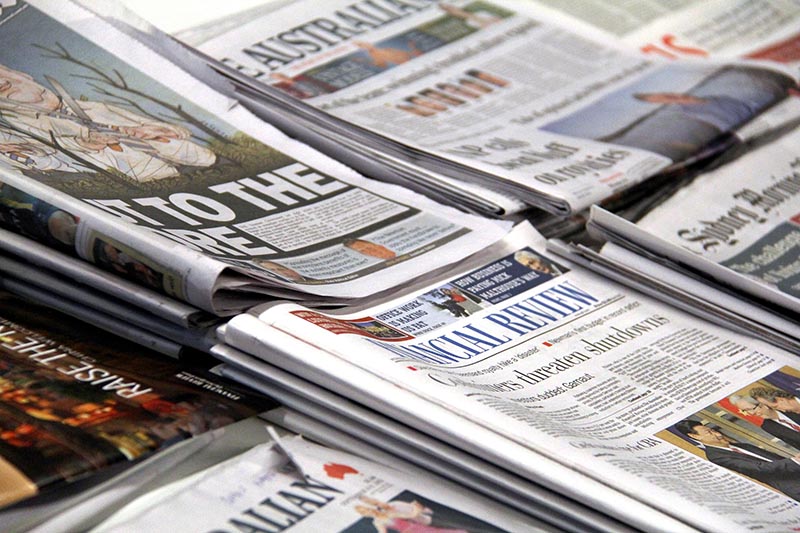 Good morning. Just a few words first about how I come to be here today.

I worked for the Australian Financial Review, in Sydney, Melbourne and Brisbane and in Hong Kong, for 20 years, in a wide range of roles. Excellent times… at first, but diminishingly so, as the paper’s leadership began to lose its mojo, to drift, along with its corporate parent. Then nine years ago I got a call from The Australian’s editor in chief Chris Mitchell asking me for lunch next time I was in Sydney. That led swiftly to an offer to become the paper’s China correspondent. Within a month of Chris asking me, I was there in Beijing. My first response to the News Corp culture, as I experienced it at The Oz: Wow. So this is what it’s like to work for adults. Constructive conversations from which corporate gossip and backbiting were impressively lacking. What’s the yarn? What length does it need to tell it? When can you file it? – those comprised the core of the communications. My view, and my enjoyment at working in such an environment which values above all professionalism and a focus on the reader and the client, has not diminished.

I’m going to talk briefly on two topics: how you can get the most out of your relationship with The Oz, and of course also our hugely esteemed sibling The Journal. And on The Australian’s role in regional and global terms, as we shift that quicksilver product we call news, across every border – without any need for free trade agreements.

And I’m going to talk out of my experience.

I work with corporate communicators every day. How do those relationships work most effectively?

It’s important to know how media like ours, function. I, for instance, have the title editor, but the only real estate I control in the paper without negotiation, is my weekly column in the business section on Thursdays. Like other specialist writers, I negotiate with the different section editors to place stories where they seem most suited. I’m not sure whether they’re my clients, or I am theirs. Sometimes I deal directly with the editor. The system works.

It is important to consume media yourselves. It’s extraordinary how many times I’ve had people who work in media relations get in touch with releases or with ideas for stories, and when I ask “where in the paper would you imagine this might be slotted,” have no idea. Many, simply don’t read it, they don’t realise we may already have covered that ground. Strong, day to day familiarisation with the media, a liking for it, an appetite, is essential.

If you’re seeking to amplify a message or introduce a broader audience to a new executive, by placing her, him or it with us, it’s good to know who you’re talking to at the paper. A coffee, a lunch, a brief meeting to put a face to a name, provides an important first step. No one likes dealing with faceless people; a Taiwanese business friend now based here told me of his frustration about the extent of Australian reliance on online communications. “In Asia,” he told me, “we relegate that to fine-tuning the quantities on an order – but discussions, doing deals, have to be done face to face or at least by phone.”

We place a premium on news, naturally. We like even more to prepare our readers, our audience, for news by telling them in advance what’s going to happen, giving them time to plan their own response to the event – a float, a big new investment, a change of chief executive, whatever.

We like to be able to tell our audience information that they can only find through us. That’s a massive priority.

So: exclusives, heads-up briefings which enable us to help people prepare for change, hold a high value in our world, and thus they should, may I suggest respectfully, in yours.

What’s the core angle in what you’re trying to communicate? Ultimately, it will be up to the journalist to package it for her or his audience. But you stand a much higher chance of information being presented in a manner with which you feel comfortable, if you have grappled with the material and arranged it in line with a credible angle first.

In presentation terms, it really helps to provide good graphic material – ideally not over-complex or requiring seven different colours to make sense of it. And it would need to be provided early enough to be refashioned as necessary by our own graphics team.

And it’s important to provide access to a company’s chief exec or chair. Especially if they are encouraged to speak frankly and freely, and are not constrained or over-coached, or rely overly on corporate jargon. Personal anecdotes and colourful emphasis count for a lot in all interviews.

We can work together, to manage expectations at both ends – at our end, to gain a sense of the bigger context, of the true significance, of the information, which will determine what kind of priority/space it receives; and at your end, so that your own chief exec or chair understands in advance what the media uptake is likely to be; it’s generally helpful to avoid disappointment and shock.

Now, on to my second theme, how news crosses borders.

I’m involved in both the import and the export of news.

In import terms, our paper has full time foreign correspondents based in London, Jerusalem, New Delhi, Jakarta and Beijing. My colleague Greg Sheridan and I also write pretty well full-time about international issues that matter to us, and about Australia’s own engagement with the world, politically, culturally and of course economically.

We also present to our readers daily, our selection of the most important, interesting and relevant stories produced by the Journal.

I seek out stories that are the most important for the region I write about – for instance, in recent weeks, the surprise election of a new president in Sri Lanka, or the implications of the jailing of Anwar Ibrahim in Malaysia, about which I’ve written daily features as well as news stories. I seek out stories that others may not cover – the PNG government’s purchase of the country’s dominant free to air TV station, to complete its dominance of broadcasting there, or new pilot schemes for democracy via public meetings at China’s grassroots.

I also seek to explain the bigger picture: who is Xi Jinping, what does his anti-corruption purge mean; can Shinzo Abe change Japan’s corporate and security cultures.

And I pursue Australian priorities and interests in the region. In 2014 for instance I focused heavily on the free trade agreements. Chiefly through my travels to and contacts in Japan, Korea and China, I correctly forecast the negotiation outcomes, and was able to explain in some detail who would most benefit in both directions, and how. I recently set the scene for trade and investment in 2015 with a long exclusive interview feature with Andrew Robb.

We who write that news, work both autonomously and also within teams that come together informally to focus on assignments. Our product is complemented and enhanced by the unique spread and skills of our Journal colleagues; the Journal last year ran an excerpt of my new book on China, for which my thanks again. I have been involved in the planning and presentation of two highly successful China conferences which have been jointly presented, in Sydney and in Melbourne, by our two papers. We are now in the throes of starting planning for a third.

Trust is a key component of such operations. Trust within and between our teams. And trust between us and our audience and clients.

When I googled the words China and economy today, there were 287 million results.

I’ll be writing a feature for our Business Review for Thursday, the eve of the Spring Festival, the start of the Year of the Sheep or Goat, on that very theme. Only the most China-obsessed or focused of our readers will be able to grapple usefully with the range of material out there, to come out with a coherent sense of what’s happening. Our audience trusts us to provide reliable analysis of such crucial issues.

People can and do turn to media sites that thrive on click-bait: baby born with two heads, UFO lands in Kansas; or lists – top ten sex positions, etc.

There’s clearly room – big room – in the market for such material. But we’re in the business of providing adult information and analysis. We constantly update fast moving stories in a well-sourced and reliable manner. We use the platforms that our audience uses.

And from my own particular perspective, we are crucially providing increased, enhanced coverage of important global and regional issues just as much of the social media is shrinking from the international dimension. Insofar as people can easily access material from abroad via most local online intermediaries, it hinges almost entirely on news or rumours about celebrities, chiefly in LA or London.

The answer for the adults among us, is clear. We’re here.