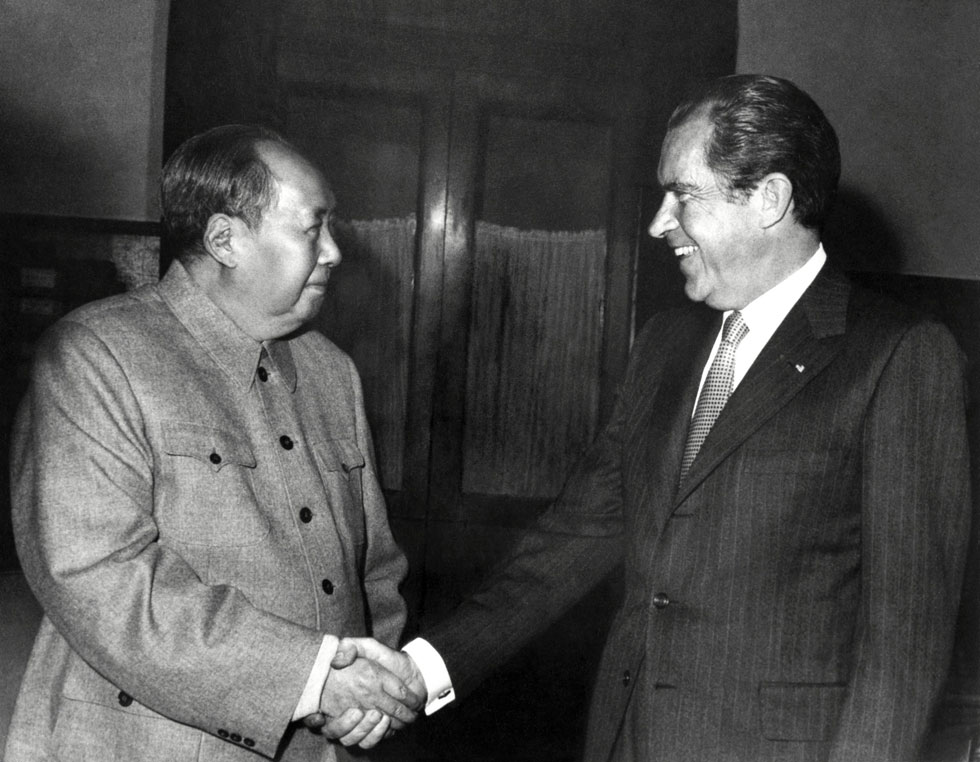 Richard Nixon first put on his makeup. Never again would the TV public be allowed to recoil from the 6 o’clock shadow that cast him a dozen years earlier as the villain in the debates with John F Kennedy.

This time of all times, the viewers of the news footage must be made aware they are watching a formidable leader seize a rare chance to shake up the way their world is shaped.

Then he walked down the steps of the Boeing 707 Air Force One, and into history in the most astonishing way. The glorious bright blueness of the winter sky – Beijing had yet to suffer its more recent “toxic growth” – matched the new livery of the plane.

Americans had taken the first lunar steps less than three years earlier. In its own way, this was a strategic version of landing on the moon.

Nixon was greeted on the tarmac at Beijing airport by Mao Zedong’s loyal, longsuffering and courtly lieutenant, Premier Zhou Enlai.

The People’s Liberation Army band played what travelling journalists – we have to find fault somewhere, even making history doesn’t give us the right to let such a show off the hook entirely – described as a toneless version of The Star-Spangled Banner.

The President and his wife Pat – who wore a red coat, traditionally the colour for brides – were accompanied by Zhou to what remains the state guest-house, Diaoyutai, set in a serene traditional Chinese water-garden in west Beijing.

That afternoon, on the very first day of their week in China, they went to meet communist party chairman Mao Zedong, who had been so ill until recently that there were fears he would not be well enough to meet Nixon. His doctor Li Zhisui – who was to write a remarkably frank memoir, The Private Life of Chairman Mao – said: “He was so bloated that he had to be fitted with a new suit and shoes. His throat was still swollen and he had difficulty talking. His muscles had atrophied from weeks of immobility, so we put him on an exercise routine a week before Nixon’s arrival.”

But on the day Nixon flew in, he went on, “Mao was as excited as I had ever seen him. He woke up early and immediately began asking when the president was scheduled to arrive. He had a shave and a haircut – his first in more than five months.” Li and his colleagues dismantled Mao’s hospital bed and moved the rest of the emergency medical equipment into the corridor connecting the study with the bedroom, hiding most of it behind potted plants.

Nixon was driven to Mao’s home inside Zhongnanhai, the vast walled zone immediately to the west of the old imperial Forbidden City where the leaders still work and mostly live. They talked for an hour.

Mao, Li wrote later, was delighted. “As soon as the president left, he changed back into his customary bathrobe. I took his pulse, which was steady and strong. Mao liked Nixon. ‘He speaks forthrightly – no beating about the bush’.”

Mao told Nixon “I like to deal with rightists. They say what they really think – not like the leftists, who say one thing and mean another.” Nixon responded that “those on the right can do what those on the left talk about.”

There were to be no more encounters with Mao, but several more lengthy meetings with Zhou, including banquets in the Great Hall of the People a short walk south of Zhongnanhai.

On the second day, the Nixons, Zhou and his wife Deng Yingchao, went to see a performance of the revolutionary ballet The Red Detachment of Women. They were accompanied by the chief architect of this high-energy proletarian myth-making, Mao’s third wife, former actress Jiang Qing – one of the notorious Gang of Four who drove the decade-long Cultural Revolution that was still ravaging China, and who was to hang herself while undergoing medical treatment in 1991 after being jailed for life. When Nixon asked her who had composed the work, she responded that it had been “created by the masses.”

Nixon, who was accompanied to China by a vast retinue, went on to tour the Great Wall, Shanghai and the nearby ancient city of Hangzhou with its famously scenic West Lake where they visited the Island of Three Towers Reflecting the Moon. Much of the visit was screened live back to avid TV viewers in the US. The Americans gave Beijing Zoo musk oxen named Matilda and Milton, and in return received pandas Ling-Ling and Hsing-Hsing.

The impact of the encounter was to be momentous. China, over time, helped the US ease its way out of the Vietnam War. The US immediately revoked travel and trade bans, and later went on to recognise the People’s Republic as the “one China.” They formed diplomatic common cause against the Soviet Union, ensuring the ultimate downfall that Russia might have avoided if the two great communist powers had marched in step. And after Mao’s death in 1976, Deng Xiaoping opened China to the world economically, laying the foundations for its extraordinary surge from poverty towards today’s comparative prosperity.

Nixon’s ultra-realist Secretary of State Henry Kissinger, who had set up the visit during a dramatic, secret foray of his own the previous year from Pakistan, told Nixon in a memo to prepare him: “Your meetings with the Chinese will be totally unlike any other experience you have had. The drama and colour of this state visit will surpass all your others… You

will have to resist being seduced by the charm of the hosts. These people are both fanatic and pragmatic.”

As a footnote, Australian audiences should be aware that Prime Minister Gough Whitlam visited China and met Mao both as opposition leader in 1971 and then as prime minister in 1973, when like Nixon they met in the chairman’s home.

Australia’s first ambassador to the PRC, Stephen Fitzgerald, who was the first Beijing based diplomat to see Mao for years, described Mao’s library, where they met, as “spacious and well lit with skylights at the four corners of the room. A bed is there on which the chairman takes rests. He appears to spend a great deal of time in this room.”

Whitlam and Fitzgerald found Mao sitting down, but he rose and came to greet them unassisted. Mao said: “My body is riddled with disease,” Whitlam asked the questions, with Mao providing single sentence answers so softly uttered and so heavily flavoured with his Hunanese origins that Fitzgerald, whose Chinese is excellent, found him difficult to follow. Fitzgerald concluded that essentially, “the scope of Mao’s existence… appears managed by Zhou and an extraordinary group of young women cadres.”

Now there’s a topic for a new commission for Victorian Opera: Whitlam In China…

*Rowan Callick is the Asia-Pacific editor of The Australian. His new book Party Time: Who Runs China and How has been published recently by Black Inc.