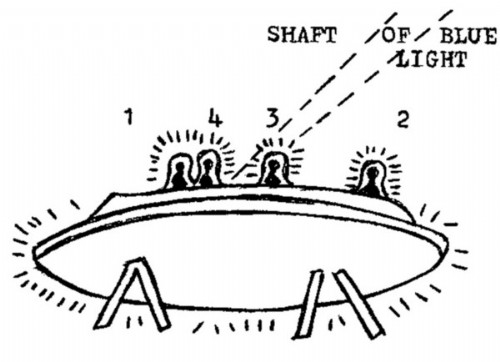 It is now 50 years since a 31 year old Australian Anglican missionary in Papua New Guinea, William Gill, and 37 parishioners and staff made the best attested and least explained sighting of unidentified flying objects in the long, otherwise cooky history of the genre.

The day before the celebrated encounter of a mystifying kind, Gill had written a letter to the Rev David Durie, the acting principal of St Aidan’s College that trained teacher-evangelists at Dogura, the then headquarters of the church in PNG.

Gill – who was priest in charge at Boianai, a large village on the mountainous north coast of Milne Bay province, about 25 km west of Dogura – told Durie of a UFO sighting by Stephen Moi, then an assistant teacher.

He wrote: “There have been quite a number of reports over the months, from reliable witnesses. The peculiar thing about these most recent reports, is that the UFOs seem to be stationary at Boanai or to travel from Boianai” – a beautiful location brilliantly captured by pioneer Australian photographer Frank Hurley in 1921.

“I myself saw a stationary white light twice on the same night on April 9… The assistant district officer, Bob Smith, and Mr Glover have seen it. I do not doubt the existence of these ‘things’, but my simple mind still requires scientific evidence before I can accept the from-outer-space theory. I am inclined to believe that probably many UFOs are more likely some form of electric phenomena – or perhaps something brought about by the atom bomb explosions etc.

“That Stephen should actually make out a saucer could be the work of the unconscious mind, as it is very likely that at some time he has seen illustrations of some kind in a magazine. It is all too difficult to understand for me; I refer to wait for some bright boy to catch one to be exhibited in Martin Place.

The following day, he wrote again:

Life is strange, isn’t it? Yesterday I wrote you a letter, expressing opinions re the UFOs. Now, less than 24 hours later I have changed my views somewhat.

“Last night we at Boianai experienced about 4 hours of UFO activity, and there is no doubt whatsoever that they are handled by beings of some kind. At times it was absolutely breathtaking. Here is the report.

Convinced Bill
P.S. Do you think P. Moresby should know about this? If people think it worthwhile, I will stand the cost of a radio conversation if you care to make out a comprehensive report from the material on my behalf!!”

What had Gill and his parishioners seen?

The notes he made following his encounter, describe a bright white light appearing in the north western sky, approaching the mission station, and then hovering about 100 metres in the air.

Gill, Moi, another teacher, Ananias Rarata, and 35 other people who all later signed a confirming document, together watched what they described as a large, disc shaped, solidly constructed object, with a wide base tapering up to a higher deck, and with what appeared to be four legs beneath, and four brightly lit panels in the side. It occasionally emitted a shaft of blue light at a 45 degree angle.

Then what they described as “men” emerged onto a deck on the top – four at most, but in various configurations. Clouds, which were at about 600 metres, then eventually obscured the vessel as it drifted higher. It had been stationary through most of the 25 minutes of this encounter.

Gill then wrote his letter to Durie. That evening, the visitation returned in an extraordinary manner. He first saw it at 6.02pm, as the sun was setting.

Gill’s account states: “We watched figures appear on top – four of them – no doubt that they are human. Two smaller UFOs were seen at the same time, stationary. One above the hills west, another overhead.

“On the large one, two of the figures seemed to be doing something near the centre of the deck – were occasionally bending over and raising their arms as though adjusting or ‘setting up’ something (not visible).

“One figure seemed to be standing looking down at us (a group of about a dozen). I stretched my arm above my head and waved. To our surprise the figure did the same. Ananias waved both arms over his head then the two outside figures did the same.

“Ananias and self began waving our arms and all four now seemed to wave back. There seemed to be no doubt that our movements were answered. All mission boys made audible gasps (of either joy or surprise, perhaps both).

“As dark was beginning to close in, I sent Eric Kodawara for a torch and directed a series of long dashes towards the UFO. After a minute or two of this, the UFO apparently acknowledged by making several wavering motions back and forth.

“Waving by us was repeated and this followed by more flashes of torch, then the UFO began slowly to become bigger, apparently coming in our direction. It ceased after perhaps half a minute and came no further.

“After a further two or three minutes the figures apparently lost interest in us for they disappeared ‘below deck.’ At 6.25 pm two figures re-appeared to carry on with whatever they were doing before the interruption. The blue spotlight came on for a few seconds twice in succession.”

The situation remained unchanged, and so Gill returned to his regular routine and went to have his dinner at 6.30. By 7pm, the main object had moved slightly away, and the observers went into the village church for evensong, as usual.

By the time they emerged, at 7.45pm, visibility had become very limited with the sky covered in cloud. At 10.40 pm, Gill wrote, an “earsplitting” explosion woke up the mission station inhabitants. Gill said it did not feel like a thunderclap.

Later, Gill said, he was always asked why he had reverted to his usual routine when there was a flying saucer apparently hovering overhead. This was partly because, he said, “there was nothing eerie or other-worldly about any of this. It was all so ordinary, as ordinary as a Ford car.

“It looked a perfectly normal sort of object, an earth-made object. I realised, of course, that some people might think of this as a flying saucer, but I took it to be some kind of hovercraft the Americans or even the Australians had built. The figures inside looked perfectly human.”

Gill’s report caused quite a sensation at the time, when PNG was an Australian colony. A Liberal federal MP from Western Australia, E D Cash, asked the then Air Minister questions in parliament, without receiving a substantive answer.

The Defence Ministry deployed two RAAF officers to investigate. Although they found Gill “a reliable observer,” they attributed the sightings to “natural phenomena,” the result of cloudy, thunder-prone weather and light refraction from Jupiter, Saturn and Mars.

Gill was educated at Trinity Grammar School in Melbourne, and then studied theology at St Francis College, Brisbane, and education at Queensland University. He was ordained priest in 1950, and then worked in PNG in parish work and as a teacher and education administrator. In Port Moresby, he also did some radio broadcasting.

After returning from PNG, he taught at Essendon Grammar, Camberwell Grammar and St Michael’s Grammar, all in Melbourne, and undertook sociological research at La Trobe University. He died aged 79 in 2007.

Gill appears an exceptionally unlikely figure to have been readily caught up in the flying saucer craze, at its most intense in the 1950s. Few phenomena would have appeared more remote to high-church Anglican missionaries in PNG, many with considerable educational attainments.

Among those most intensely interested in the sightings, was Englishman Norman Cruttwell, an outstanding exemplar of the long tradition of priest-botanists, who discovered and named – after his mother Christian – a rhododendron in PNG, and had an orchid named after him in tribute.

Gill wrote to Cruttwell, who was also running a parish in northern Milne Bay: “Here is a lot of material – the kind you have been waiting for, no doubt; but I am in some ways sorry that it has to be me who supplies it. Attitudes at Dogura in respect of my sanity vary greatly, and like all mad men, I myself think my grey cells are O.K…”

Among the hypotheses later considered to explain Gill’s sightings, was that he was pulling Cruttwell’s leg. But if so, when Cruttwell became excited, and helped inform the world about the events, Gill might then have been expected to stay quiet and wait for the embarrassment to pass.

Instead, Gill accepted invitations to speak widely about what he had seen, with no apparent reluctance.

Australian author Randolph Stow, who worked at an Anglican mission station for Aborigines in north-western Australia and then as assistant to the government anthropologist in PNG, where he was based in Milne Bay, framed an acclaimed novel in 1979, “Visitants,” around the Boianai sightings.

“Be not afeard,” Stow cites from Shakespeare’s the Tempest: “The isle is full of noises…”

*The writer knew both Norman Cruttwell and Stephen Moi – by then a priest – when he worked in PNG. Cruttwell famously missed out on a sighting of bright lights over his own mission station, because he was ensconced in the “smallhaus.” The following day, he had the roof replaced with a clear glass panel, just in case…